One sip for our Lord, one sip for Pachamama (mother earth). These are the wise words that the Indian breeders of llamas and alpacas pronounced when toasting with us. At the same time they spilled a couple of wine drops onto the ground, as a sign of thankfulness. A gesture of kindness that could easily be misunderstood, if one does not know about the spirituality and beliefs of the Chilean natives. 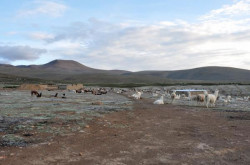 As previously announced, at the beginning of this year we started again on a new journey to Chile, to the Altiplano, place of origin of our beloved llamas and alpacas. In a group of eight enthusiastic travelers - all of us passionate about llamas and alpacas, some of us also breeders - we started from Santiago de Chile and proceeded to Arica, Pudre, La Serena, up to the amazing islands Alexander Humboldt once explored.
It does not matter how often you see this unique landscapes, the immense, barren yet fertile plains, and the incredible variety of species that inhabit them, you will always be deeply touched and impressed. Besides climbing the active vulcano Villaricca and going through the breathtaking plains of the Altiplano, the highlight of our trip was definitely observing the massive herds of llamas and alpacas in this area. Mostly these strong, resistant, frugal animals are the only real possession of the Altiplano. The herds here are made up by hundreds, sometimes even thousands of animals, numbers that would even be impossible to conceive in Europe. We see animals of all heights, colors and ages. They have nothing but their wool to protect them against the extreme temperature changes trough the day and survive with the little grass they find up there. But they are used to it – actually it was their natural surviving strategy.
Two worlds collide here: on the one hand the western world, where for a good breeding animal people would pay even more than 100.000€. On the other hand there is South America, where the success of a breeding depends exclusively on the numbers. Farmers here live quiet, regular lives under the simplest conditions. This is what struck and opened new perspectives to us.
At a closer look we realise that there are only very few llamas and alpacas that would fit into the European breeding standards. But what is more important to us is all the impressions and experiences that the Latin American Subcontinent gave us and that no words or images will describe or explain. 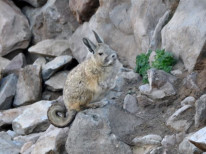 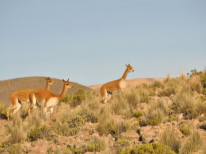 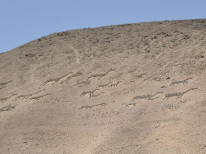